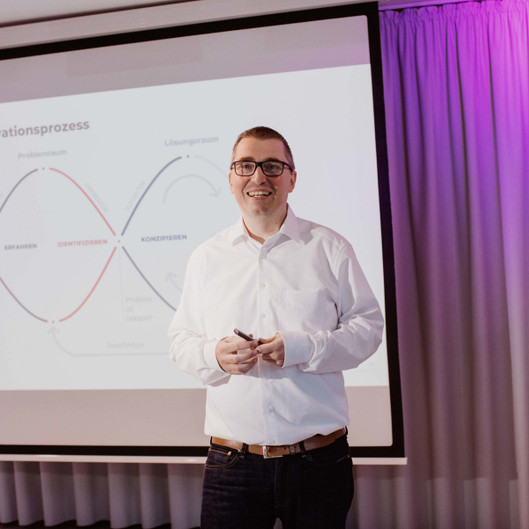 This widespread motto has been strongly internalized by our team over the past week. Because if corona causes almost all planned events and lectures to be cancelled, new ways must be found to share our knowledge with the world. Our answer to this is the UXMA Webcast, a series of exciting and above all informative online sessions, which were streamed live from our Kiel studio into the net. Three of them we will introduce briefly:

A current challenge for many companies is that their teams are no longer concentrated in one location. Home office has become the new norm in 2020 and many employees have to adapt their work to the new conditions. Our Senior Designer & Innovation Lead Karsten Pingler is also familiar with the various challenges of remote work from his many years of experience in internationally distributed project teams.

How can teams work well together, even if they are not located at one site? In the webcast Ideation meets Remote Work, Karsten presents on the one hand proven Ideation methods from everyday project work and on the other hand he explains which techniques and digital tools are particularly suitable for remote work scenarios.

Bild1: Karsten in the webcast „Ideation meets Remote Work“
Bild2: Screenshot from the webcast „Trust me – I'm a Designer“

Trust me – I'm a Designer

Ethical action in design is a current topic that occupies the digital world. For the two UX/UI designers Carina Wente and Maren Rittmeister, this topic is more important than ever, since they know that their work significantly influences and guides user behavior.

Did you know, for example, that the app structure of Instagram is based on the psychological mechanism of a one-armed bandit? In the webcast on the topic of Trust me - I'm a Designer, Carina and Maren want to create an awareness of ethical behavior in design and show concrete approaches on how we at UXMA deal with this responsibility.

„Just because something is legal does not mean that it is ethically correct.“

Carina Wente in the webcast „Trust me – I'm a Designer“

In the webcast Design-Driven Development, UXMA CEO Eckhard Anders explains why design has a decisive influence on various architectural decisions and what value the close and interdisciplinary cooperation of designers and developers in a project team has. With his many years of project management experience, the graduate computer scientist comes to the conclusion that the collaboration between designers and developers not only combines creative and analytical thinking, but also a structured approach and emotional experiences.

"The whole thing can be exhausting," says Eckhard himself, "but the result is more promising than in teams working separately.“ When the skills of both areas merge into one team, this not only increases the success of the project, it also promotes team spirit!

PS: Did you miss the presentations? No problem, because next year we will present exciting topics again. If you want to be there, write us an e-mail to business (at) uxma.com and we will send you an invitation.